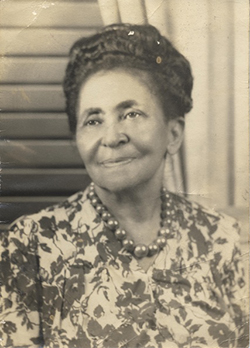 Jacksonville has a population of more than sixty thousand Negroes. As a general rule these Negroes are hardworking, and self-supporting to an extent even greater than in many cities where industries are many.

It is inevitable, however, that out of a population of this size there would be hundreds of needy people; children whose parents have not sufficient means to properly care for them, children who have no parents, widows left destitute by death or desertion, aged people whose children cannot defray the expenses of feeding and caring for them, invalids and sick people whose maladies cannot be cured or alleviated through their own efforts.

It is these people who were uppermost in the minds of Eartha M. M. White, and her mother Clara before her, when they began the series of charitable activities that have finally come to a head in the Clara White Mission, probably one of the most diversified and far-reaching charitable organizations for Negroes in the entire south.

The Mission had its birth in an effort to establish an Old Folks Home. This was accomplished, and still stands today as the initial charitable effort of the head of the Mission. The care of orphaned children came later; still later, the distribution of food-sometimes humble, it is true, but frequently plentiful and always welcome-to the needy. This activity ranged from soup lunches at the home and in the garage of Miss White to the elaborate dinners for the needy children, the blind and the aged at Christmas time at the Mission.

Tuberculosis came in among the later activities of the Mission and its heads• From a beginning on absolutely nothing a persistent drive was made for a rest and cure home for the growing number of lung sufferers in the city. Today there stands a comfortable, adequate home for tubercular prevention and cure in the city, which will probably be open and in full operation by the time this volume is off the press.

Nearly a quarter of a century of careful planning and farsightedness have at last brought the Mission to the point that had been visualized for it in the very beginning: a point where self-help, rather than bare charity, could be the keynote of many of its activities.

Evidences of the success of this idea are to be found in the newel' Mission activities; there are WPA classes where adult women are taught sewing, cooking and homemaking, under Mission care and guidance; a WPA sewing room in the Mission building, where more than a hundred women are given steady employment; an employment service, that place dozens of men and women in jobs about the homes and stores of the city; an Art class, a Writers' project, a class in nursing and home hygiene, and other similar projects to aid the dependent Negro in earning for himself some of those benefits that in the past could come only through direct charity.

Perhaps the most optimistic of the symptoms of this new day in Mission activities, however, is the commendable class of instruction for the blind. Even though gravely handicapped, these unfortunates are being taught to cane chairs, do beadwork, make belts, read Braille writing, and in many ways earn honest pennies for themselves in activities of a plane far above that of the street-corner mendicant.

No volume this size can attempt to relate the past and present work of the Clara White Mission. It can only be hoped that the pictures in these pages can give a graphic summary in brief of the scope of the work, and more important, an idea of the work that still needs to be done. This work can only be accomplished through the interest and support of the public spirited citizens of Jacksonville. In an effort to solicit that interest and support this volume is dedicated.