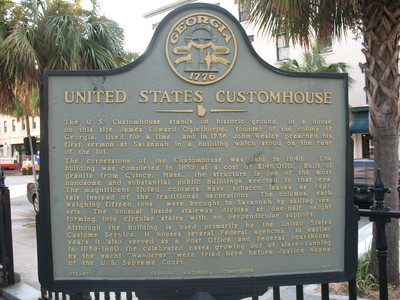 The cornerstone of the Custom House was laid on July 20, 1848, with full Masonic honors.. The building was completed in 1852. This building stands on historic ground. James Edward Oglethorpe lived in a house on this site, which was built in 1733. The US Custom House is Georgia's oldest Federal building.

The Marker reads -- The United States Customhouse stands on historic ground. In a house on this site, James Edward Oglethorpe, founder of the colony of Georgia, lived for a time, and in 1736 John Wesley preached his first sermon at Savannah in a building which stood on the rear of the lot. The cornerstone of the Customhouse was laid in 1848. The building was completed in 1852 at a cost of $146,000. Built of granite from Quincy, Mass., the structure is one of the most handsome and substantial public buildings erected in that era. The magnificent fluted columns have tobacco leaves as capitals instead of the traditional decorations. The columns, each weighing fifteen tons, were brought to Savannah by sailing vessels. The unusual inside stairway divides at one-half height forming into circular stairs with no perpendicular support. Although the building is used primarily by the United States Customs Service, it houses several Federal agencies. In earlier years it also served as a Post Office and Federal Courthouse. In 1859-1860 the celebrates cases growing out of slave-running by the yacht "Wanderer" were tried here before Justice Wayne of the U.S. Supreme Court.