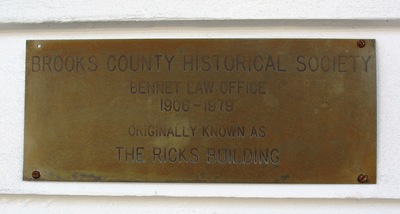 This is a commercial building in the Quitman Historic District, Georgia. It was the Bennett law Office from 1906-1979. Originally it was known as the Ricks Building. The Bennett Law Firm has served the community for six decades. Mike S Bennett Sr. had started the firm and then his sons Michael S Bennett and Time T Bennett joined him.

This is the plaque on the Ricks building which reads -