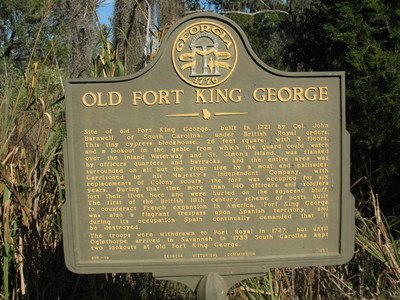 This is the marker on the Fort King George Fort, which was built in 1776. It reads as - Site of old Fort King George, built in 1721 by Col. John Barnwell, of South Carolina, under British Royal orders. This tiny cypress blockhouse, 26 feet square, with 3 floors, and a lookout in the gable from which the guard could watch over the Inland Waterway and St. Simon’s Island, was flanked by officers quarters and barracks, and the entire area was surrounded on all but the river side by a moat and palisades. Garrisoned by his Majesty’s Independent Company, with replacements of Colony scouts, the fort was occupied for six years. During that time more than 140 officers and soldiers lost their lives here and were buried on the adjacent bluff. The first of the British 18th century scheme of posts built to counteract French expansion in America, Fort King George was also a flagrant trespass upon Spanish territory, and during its occupation Spain continually demanded that it be destroyed. The troops were withdrawn to Port Royal in 1727, but until Oglethorpe arrived in Savannah in 1733 South Carolina kept two lookouts at old Fort King George.