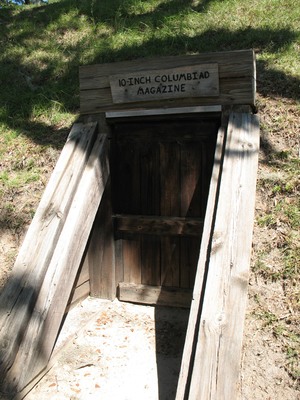 Confederate U.S. Civil War Coastal Fort established in 1861 by Captain John McCrady, Confederate Engineers to protect Savannah, Georgia. Named after the family of Colonel Joseph L. McAllister. Captured by Union forces in 1864 by the forces of Union General William T. Sherman in his march to the sea. Maintained as a Union prison until the end of the war.

Fort McAllister was armed with 11 large caliber siege guns, 12 field pieces and one 10" mortar. This is the entrance to the underground ammunition magazine