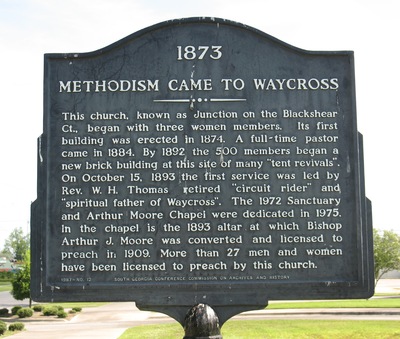 This marker "Methodism came to Waycross" is at the intersection of Gilmore Street & Reed Street, at the First United Methodist Church. It was erected in 1987 by South Georgia Conference Commission on Archives History.

This historical marker reads as :

This church, known as the Junction on the Blackshear Ct., began with three women members. Its first building was erected in 1874. A full-time pastor came in 1884. By 1892 the 500 members began a new brick building at this site of many “tent revivals”. On October 15, 1893 the first service was led by Rev. W. H. Thomas retired “circuit rider” and “spiritual father of Waycross”. The 1972 Sanctuary and Arthur Moore Chapel were dedicated in 1975. In the chapel is the 1893 altar at which Bishop Arthur J. Moore was converted and licensed to preach in 1909. More than 27 men and women have been licensed to preach by this church.