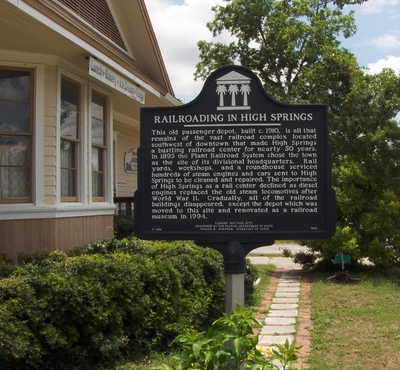 This was erected in 1995 by the Florida Department of State, located on 20 NW Railroad Avenue in High Springs, Florida, where the ACL Depot was built.

The marker reads as : This old passenger depot, built c. 1910, is all that remains of the vast railroad complex located southwest of downtown that made High Springs a bustling railroad center for nearly 50 years. In 1895 the Plant Railroad System chose the town as the site of its divisional headquarters. Rail yards, workshops, and a roundhouse serviced hundreds of steam engines and cars sent to High Springs to be cleaned and repaired. The importance of High Springs as a rail center declined as diesel engines replaced the old steam locomotives after World War II. Gradually, all of the railroad buildings disappeared, except the depot which was moved to this site and renovated as a railroad museum in 1994. Sponsored by the Florida Department of State 1995 .