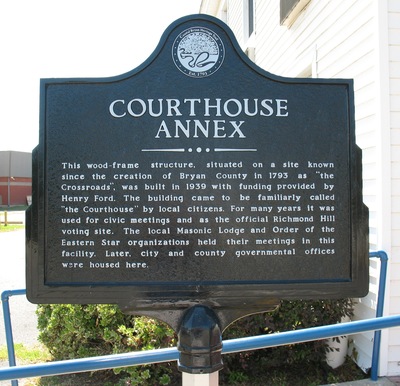 This marker is outside the Courthouse Annex in Richmond Hill Georgia. It was built in 1939 with funding provided by Henry Ford. It was used for civic meetings and official voting site. Later the city and county government offices were housed here.

The marker is located on the intersection of Ford Avenue and Ellis Drive, and reads as :

" This wood-frame structure, situated on a site known since the creation of Bryan County in 1793 as “the Crossroads”, was built in 1939 with funding provided by Henry Ford. The building came to be familiarly called “the Courthouse” by local citizens. For many years it was used for civic meetings and as the official Richmond Hill voting site. The local Masonic Lodge and Order of the Eastern Star organizations held their meetings in this facility. Later, city and county governmental offices were housed here."