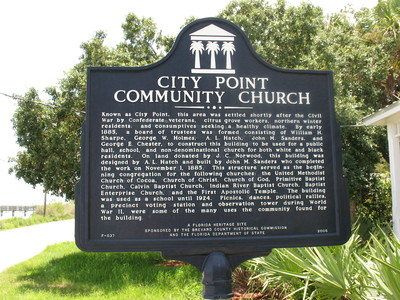 Also known as the Brevard County Environmental Field Station, this historic church was added to the U.S. National Register of Historic Places in 1995. On land donated by J.C. Norwood, this building was designed by A.L. Hatch and built by John M. Sanders, in 1885. This marker has been sponsored by the Brevard County Historical Commission and the Florida Department of State.

" "Known as City Point, this area was settled shortly after the Civil War by Confederate veterans, citrus grove workers, northern winter residents, and consumptives seeking a healthy climate. By early 1885, a board of trustees was formed consisting of William H. Sharpe, George W. Holmes, A.L. Hatch, John M. Sanders, and George E. Chester, to construct this building to be used for a public hall, school, and non-denominational church for both white and black residents. On land donated by J.C. Norwood, this building was designed by A.L. Hatch and built by John M. Sanders who completed the work on November 1, 1885. This structure served as the beginning congregation for the following churches: the United Methodist Church of Cocoa, Church of Christ, Church of God, Primitive Baptist Church, Calvin Baptist Church, Indian River Baptist Church, Baptist Enterprise Church, and the First Apostolic Temple. The building was used as a school until 1924. Picnics, dances, political rallies, a precinct voting station and observation tower during World War II, were some of the many uses the community found for the building."