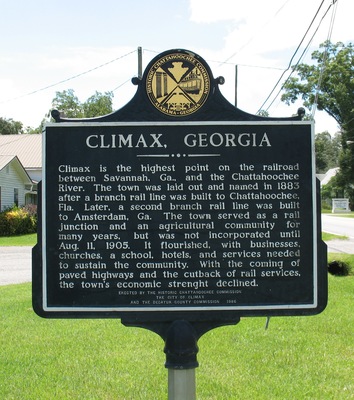 Climax is a city in Decatur County, Georgia, United States. The town was named Climax because it is located at the highest point of the railroad between Savannah, Georgia and the Chattahoochee River. This marker is located at Courthouse/ Old Depot at park on New St in Climax.

" Climax is the highest point on the railroad between Savannah, Ga., and the Chattahoochee River. The town was laid out and named in 1883 after a branch rail line was built to Chattahoochee, Fla. Later, a second branch rail line was built to Amsterdam, Ga. The town served as a rail junction and an agricultural community for many years, but was not incorporated until Aug. 11, 1905. It flourished, with businesses, churches, a school, hotels, and services needed to sustain the community. With the coming of paved highways and the cutback of rail services, the town´s economic strength [sic] declined."