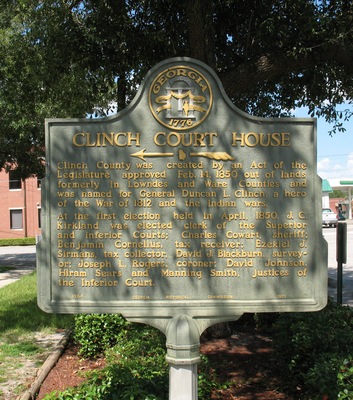 This marker is located outside the Clinch County Court House. This county was formed and named after General Duncan L. Clinch, a hero of the was of 1812.

"Clinch County was created by an Act of the Legislature approved Feb. 14, 1850 out of lands formerly in Lowndes and Ware Counties and was named for General Duncan L. Clinch, a hero of the War of 1812 and the Indian wars. At the first election held in April, 1850, J.C. Kirkland was elected clerk of the Superior and Inferior Courts; Charles Cowart, sheriff; Benjamin Cornelius, tax receiver; Ezekiel J. Sirmans, tax collector, David J. Blackburn, survey- or; Joseph L. Rogers, coroner; David Johnson, Hiram Sears and Manning Smith, justices of the Inferior Court."