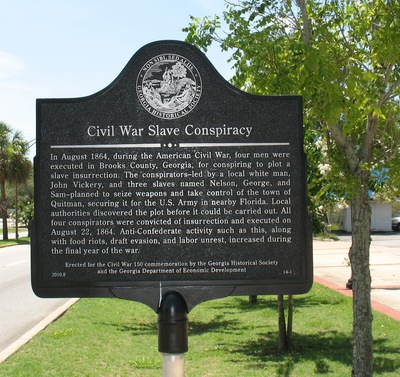 This marker was erected to remember the execution of four black men for conspiring to plat a slave insurrection, during the American Civil War. It was erected by the Georgia Historical Society and the Georgia Department of Economic Development, across the courthouse in Quitman, Georgia.

" In August 1864, during the American Civil War, four men were executed in Brooks County, Georgia, for conspiring to plot a slave insurrection. The conspirators-led by a local white man, John Vickery, and three slaves named Nelson, George, and Sam-planned to seize weapons and take control of the town of Quitman, securing it for the U.S. Army in nearby Florida. Local authorities discovered the plot before it could be carried out. All four conspirators were convicted of insurrection and executed on August 22, 1864. Anti-Confederate activity such as this, along with food riots, draft evasion, and labor unrest, increased during the final year of the war."

Erected for the Civil War 150 commemoration.