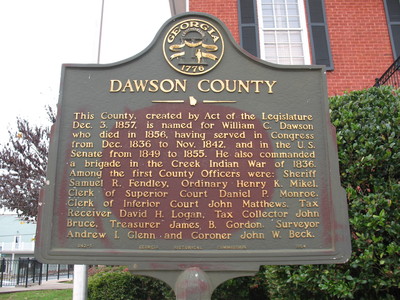 This marker is located outside the Old courthouse in Dawsonville, Georgia. This was installed by the Georgia Historical Commission in 1954.

" This County, created by Act of the Legislature Dec. 3, 1857, is named for William C. Dawson who died in 1856, having served in Congress from Dec. 1836 to Nov. 1842, and in the U.S. Senate from 1849 to 1855. He also commanded a brigade in the Creek Indian War of 1836. Among the first County Officers were: Sheriff Samuel R. Fendley, Ordinary Henry K. Mikel, Clerk of Superior Court Daniel P. Monroe, Clerk of Inferior Court John Matthews, Tax Receiver David H. Logan, Tax Collector John Bruce, Treasurer James B. Gordon, Surveyor Andrew I. Glenn and Coroner John W. Beck. "