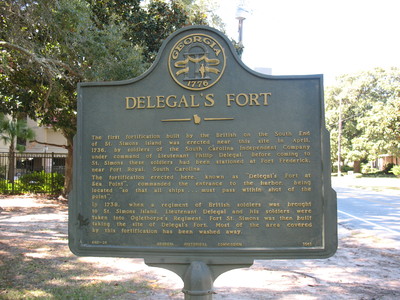 This marker is located on Ocean Blvd, north of Demere Rd, in St Simons Island, GA. It was sponsored by the Georgia Historical Commission 1961.

" The first fortification built by the British on the South End of St. Simons Island was erected near this site in April, 1736, by soldiers of the South Carolina Independent Company under the command of Lieutenant Philip Delegal. Before coming to St. Simons these soldiers had been stationed at Fort Frederica near Port Royal, South Carolina. The fortification erected here, known as ´Delegal´s Fort at Sea Point´, commanded the entrance to the harbor, being located ´so that all ships... must pass within shot of the point´. In 1738, when a regiment of British soldiers was brought to St. Soimons Island, Lt. Delegal and his soldiers were taken into Oglethorpe´s Regiment. Fort St. Simons was then built taking the site of Delegal´s Fort. Most of the area covered by the fortification has been washed away."