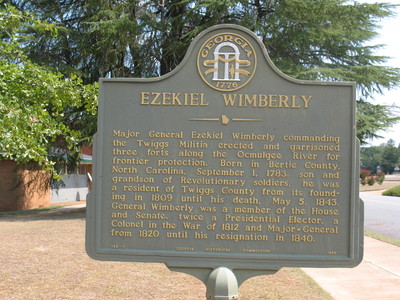 This marker is located at the courthouse in Jeffersinville, Twiggs County, Georgia. It was placed by the Georgia Historical Commission in 1955.

" Major General Ezekiel Wimberly commanding the Twiggs Militia erected and garrisoned three forts along the Ocmulgee River for frontier protection. Born in Bertie County, North Carolina, September 1, 1783, son and grandson of Revolutionary soldiers, he was a resident of Twiggs County from its founding in 1809 until his death, May 5, 1843. General Wimberly was a member of the House and Senate, twice a Presidential Elector, a Colonel in the War of 1812 and Major-General from 1820 until his resignation in 1840."