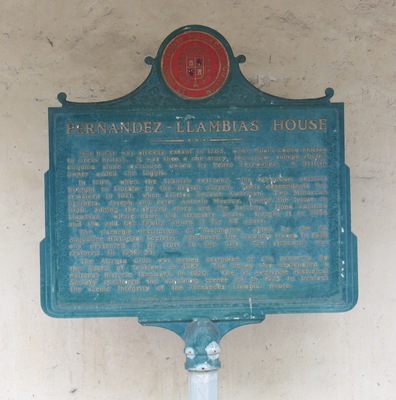 This marker is located outside the Llanbias House, which is on of the oldest restored houses in St Augustine, Florida. Its origin date dates back to 1763. It was restored in 1954, by the St. Augustine Restoration and Preservation Association.

" The Fernandez-Llambias House is one of St. Augustine's oldest restored buildings whose origin dates back to the final of the first Spanish occupation, circa 1763. At that time this coquina house was a one-story Spanish dwelling owned by Pedro Fernandez. It is said that the balcony and upstairs bedrooms were added during Minorcan ownership in the early 1800's. In 1954, the house was restored by the St. Augustine Restoration and Preservation Association. Later, by agreement between Carnegie Institution, the City and the St. Augustine Historical Society, the Society assumed all responsibility for the maintenance and interpretation of the house and grounds. The front elevation of the house was restored to an appearance of the Territorial period (1821-1845). The walls are built of native shell stone (Spanish--coquina). The floor is tabby (Spanish--tapia), a concrete made of oyster shell, sand and line. Structural wood is yellow pine. At various places in the house, the superimposed coats of paint have been restrained. Elsewhere, the techniques of lathing and shingling may be observed."