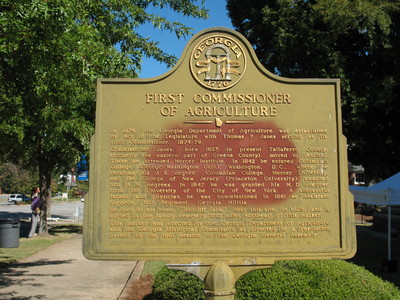 This is located on N Main St at the Greene County Courthouse, Greensboro, GA.

" In 1874, the Georgia Department of Agriculture was established by Act of the Legislature with Thomas P. Janes serving as its first Commissioner, 1874-79. Commissioner Janes, born 1823 in present Taliaferro County, (formerly the eastern part of Greene County), moved to Penfield. There he attended Mercer Institute. In 1842 he entered Columbian College (George Washington Univ.), Washington, D.C., where he received his A.B. degree. Columbia College, Mercer University, and the College of new Jersey (Princeton University) awarded his A.M. degrees. In 1847 he was granted his M.D. degree from the University of the City of new York. A successful farmer and physician he was commissioned in 1861 as Assistant Surgeon, 16th Regiment, Georgia militia.

He died at his home, “Redcliff Farm”, near this site, in 1885, and is buried in the family cemetery four miles northeast of this marker.

This marker was erected by the Georgia Department of Agriculture and the Georgia Historical Commission as directed in a resolution passed by the 1961 session of the Georgia General Assembly."