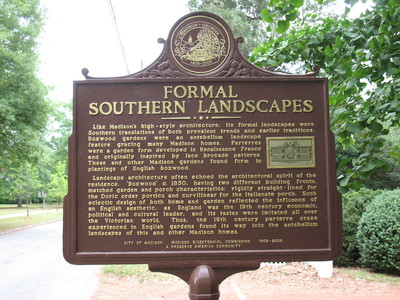 It is located on Boxwood on Academy and Porter Sts, Madison, Georgia.

" Like Madison's high-style architecture, its formal landscapes were Southern translations of both prevalent trends and earlier traditions. Boxwood gardens were an antebellum landscape feature gracing many Madison home's. Parterres were a garden form developed in Renaissance France and originally inspired by lace brocade patterns. These and other Madison gardens found form and plantings of English boxwood. Landscape architecture often echoed the architectural spirit of the residents. ‘Boxwood” c. 1850, having two different building fronts, matched garden and porch characteristics: rigidly straight-line for the Doric order portico and curvilinear for the Italianate porch. Such eclectic design of both home and garden reflected the influence of English aesthetic, as England was the 19th century economic, political and cultural leader, and its taste were inherited all over the Victorian world. Thus, the 19th century parterre craze experienced in English gardens found its way into the antebellum landscape of this and other Madison homes."