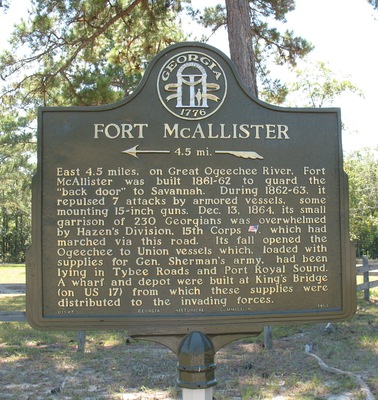 " East 4.5 miles, on Great Ogeechee River, Fort McAllister was built 1861-62 to guard the ´back door´ to Savannah. During 1862-63, it repulsed 7 attacks by armored vessels, some mounting 15-inch guns. Dec. 13, 1864, its small garrison of 230 Georgians was overwhelmed by Hazen´s Division, 15th Corps [US], which had marched via this road. Its fall opened the Ogeechee to Union vessels which, loaded with supplies for Gen. Sherman´s army, had been lying in Tybee Roads and Port Royal Sound. A wharf and depot were built at King´s Bridge (on US 17) from which these supplies were distributed to the invading forces."