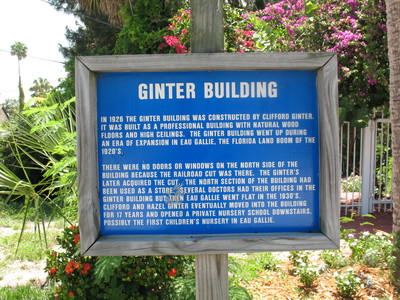 The Ginter Building is a historic U.S. building located at 1540 Highland Avenue, Melbourne, Florida. The building was constructed in 1926 by Clifford Ginter. Over the years, it was used as an apartment building, a rescue mission house, a store, professional offices, and a nursery school.

" In 1926 the Ginter Building was constructed by Clifford Ginter. It was built as a professional building with natural wood floors and high ceilings. The Ginter Building went up during an era of expansion in Eau Gallie, the Florida land boom of the 1920's.

There were no doors or windows on the north side of the building because the railroad cut was there. The Ginter's later acquired the cut. The north section of the building had been used as a store. Several doctors had their offices in the Ginter Building but then Eau Gallie went flat in the 1930's. Clifford and Hazel Ginter eventually moved into the building for 17 years and opened a private nursery school downstairs, possibly the first children's nursery in Eau Gallie."