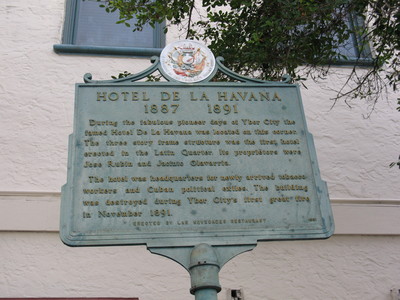 This marker is located where Havana Hotel once stood. it was the first hotel to be constructed in the Latin Quarter. Later it was destroyed by the great fire.

During the fabulous pioneer days of Ybor City the famed Hotel De La Havana was located on this corner. The three story frame structure was the first hotel erected in the Latin Quarter. Its proprietors were Jose Rubin and Jacinto Olavarria...The hotel was headquarters for newly arrived tobacco workers and Cuban political exiles. The building was destroyed during Ybor City's first great fire in November 1891.