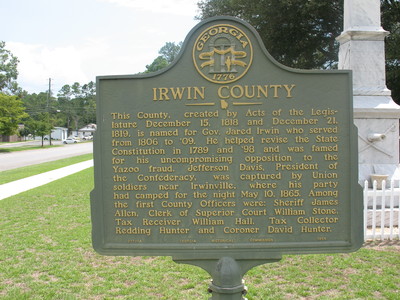 This marker is located in the Courthouse in Ocilla, Georgia. This county was named for Governor Jared Irwin.

" This County, created by Acts of the Legislature December 15, 1818 and December 21, 1819, is named for Gov. Jared Irwin who served from 1806 to ´09. He helped revised the State Constitution in 1789 and ´98 and was famed for his uncompromising opposition to the Yazoo fraud. Jefferson Davis, President of the Confederacy, was captured by Union soldiers near Irwinville, where his party had camped for the night May 10, 1865. Among the first County Officers were: Sheriff James Allen, Clerk of Superior Court William Stone, Tax Receiver William Hall, Tax Collector Redding Hunter and Coroner David Hunter. "