The March to the Sea Marker, Eatonton, GA 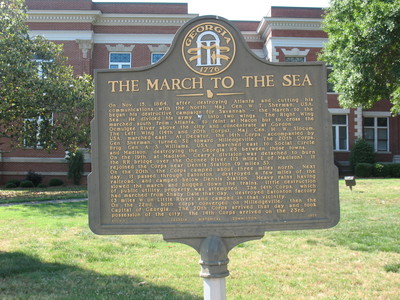 The March to the Sea Marker, Eatonton, GA.

This is located in the Putnam County Courthouse Square, in Eatonton, Georgia.

THE MARCH TO THE SEA

On Nov. 15, 1864, after destroying Atlanta and cutting his unications with the North, Maj. Gen. W.T. Sherman, USA, began his destructive campaign for Savannah – the March to the Sea. He divided his army into two wings. The Right Wing marched south from Atlanta, to feint at Macon but to cross the Ocmulgee River above the city and concentrate at Gordon. The Left Wing (14th and 20th Corps), Maj. Gen. H. W. Slocum, USA, marched east. At Decatur, the 14th Corps, accompanied by Brig. Gen. A.S. Williams, USA, marched east to Social Circle and Madison, destroying the Georgia RR between those towns. On the 19th, at Madison, Geary’s division was detached to burn the RR bridge over the Oconee River (13 miles E of Madison). It rejoined the Corps near Dennis Station (9 miles S). On the 20th, the Corps camped about three miles north. Next day, it passed through Eatonton, destroyed a few miles of the railroad, and camped below Dennis Station. Heavy rains having slowed the march and bogged down the trains, little destruction of public utility property was attempted. The 14th Corps, which had marched from Shady Dale that day, destroyed Eatonton factory (3 miles W on Little River) and camped in that vicinity. On the 22nd, both corps converged on Milledgeville, then the Capital of Georgia. The 20th Corps arrived that day and took possession of the city; the 14th Corps arrived on the 23rd."