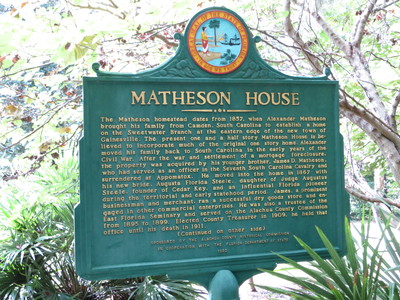 This marker is located on the Matheson House grounds in Gainesville, Florida. The building is now part of the Matheson Museum, which recounts the history of Alachua County. On June 4, 1973, it was added to the U.S. National Register of Historic Places.

" The Matheson homestead dates from 1857, when Alexander Matheson brought his family from Camden, South Carolina to establish a home on the Sweetwater Branch at the eastern edge of the new town of Gainesville. The present one and a half story Matheson House is believed to incorporate much of the original one story home. Alexander moved his family back to South Carolina in the early years of the Civil War. After the war and settlement of a mortgage foreclosure, the property was acquired by his younger brother, James D. Matheson, who had served as an officer in the Seventh South Carolina Cavalry and surrendered at Appomattox. He moved into the home in 1867 with his new bride, Augusta Florida Steele, daughter of Judge Augustus Steele, founder of Cedar Key, and an influential Florida pioneer during the territorial and early statehood period. James, a prominent businessman and merchant, ran a successful dry goods store and engaged in other commercial enterprises. He was also a trustee of the East Florida Seminary and served on the Alachua County Commission from 1895 to 1899. Elected County Treasurer in 1909, he held that office until his death in 1911. "

(Continued on other side)