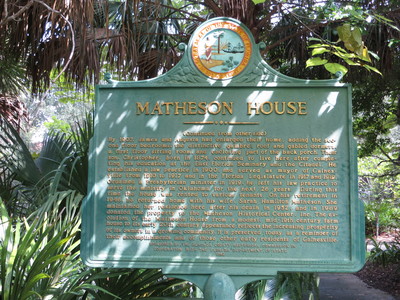 This marker is located on the Matheson House grounds in Gainesville, Florida. The building is now part of the Matheson Museum, which recounts the history of Alachua County. On June 4, 1973, it was added to the U.S. National Register of Historic Places.

The marker reads as : ( side 2) continued from other side

" By 1907, James and Augusta had enlarged their home, adding the second floor bedrooms, the distinctive gambrel roof and gabled dormers, a first floor sitting room, and enclosing part of the back porch. Their son, Christopher, born in 1874, continued to live here after completing his education at the East Florida Seminary and the Citadel. He established a law practice in 1900, and served as mayor of Gainesville from 1910 to 1917 and in the Florida Legislature in 1917 and 1919. Ordained a Presbyterian minister in 1919, he left his law practice to serve the ministry in Oklahoma for the next 26 years. During this time the house was rented to various tenants. On his retirement in 1946, he returned home with his wife, Sarah Hamilton Matheson. She maintained her residence here after his death in 1952, and in 1989 donated the property to the Matheson Historical Center, Inc. The evolution of the Matheson House from a modest, mid-19th century farm house to its early 20th century appearance reflects the increasing prosperity of its owners in a growing community. It is preserved today as a reminder of their accomplishments and of those other early residents of Gainesville. "