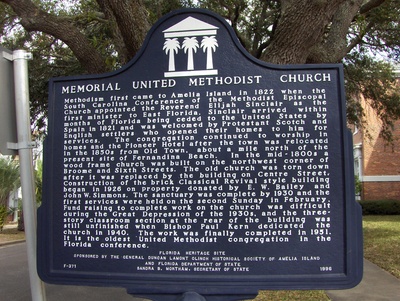 It is located on the NE Corner of Center and Sixth streets, in Nassua County , Florida.

" Methodism first came to Amelia Island in 1822 when the South Carolina Conference of the Methodist Episcopal Church appointed the Reverend Elijah Sinclair as the first minister to East Florida. Sinclair arrived within months of Florida being ceded to the United State by Spain in 1821 and was welcomed by Protestant Scotch and English settlers who opened their homes to him for services. The congregation continued to worship in homes and the Pioneer Hotel after the town was relocated in the 1850s from Old Town, about a mile north of the present site of Fernandina Beach. In the mid-1800s a wood frame church was built on the northwest corner of Broome and Sixth Streets. The old church was torn down after it was replaced by the building on Centre Street. Construction of the brick Classical Revival style building began in 1926 on property donated by E.W. Bailey and John W. Simmons. The sanctuary was complete by 1930 and the first services were held on the second Sunday in February. Fund raising to complete work on the church was difficult during the Great Depression of the 1930's, and the three-story classroom section at the rear of the building was still unfinished when Bishop Paul Kern dedicated the church in 1940. The work was finally completed in 1951. It is the oldest United Methodist congregation in the Florida conference."