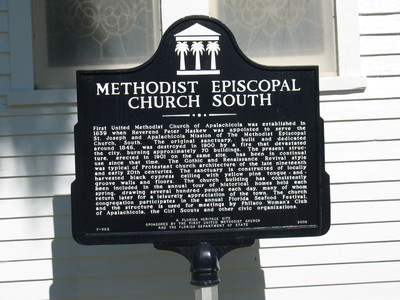 " First United Methodist Church of Apalachicola was established in 1839 when Reverend Peter Haskew was appointed to serve the St. Joseph and Apalachicola Mission of The Methodist Episcopal Church, South. The original sanctuary, built and dedicated around 1846, was destroyed in 1900 by a fire that devastated the city, burning approximately 70 buildings. The present structure, erected in 1901 on the same site, has been in continual use since that time. The Gothic and Renaissance Revival style was typical of Protestant church architecture of the late 19th and early 20th centuries. The sanctuary is constructed of locally harvested black cypress ceiling with yellow pine tongue-and-groove walls and floors. The church building has consistently been included in the annual tour of historical homes held each spring, drawing several hundred people each day, many of whom return later for a leisurely appreciation of the town. The church congregation participates in the annual Florida Seafood Festival, and the structure is used for meetings by Philaco Woman´s Club of Apalachicola, the Girl Scouts and other civic. "