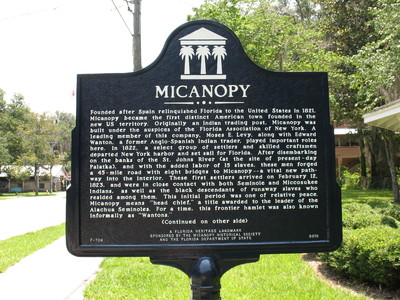 This marker is located in front of the gazebo, in Micanopy in Alachua County Florida.

" Founded after Spain relinquished Florida to the United States in 1821. Micanopy became the first distinct American town founded in the new US territory. Originally an Indian trading post, Micanopy was built under the auspices of the Florida Association of New York. A leading member of the company, Moses E. Levy, along with Edward Wanton, a former Anglo-Spanish Indian trader, played important roles here. In 1822, a select group of settlers and skilled craftsmen departed New York harbor and set sail for Florida. After disembarking on the banks of the St. Johns River (at the site of present-day Palatka), and with the added labor of 15 slaves, these men forged a 45-mile road with eight bridges to Micanopy -- a vital new pathway into the interior. These first settlers arrived on February 12 1823, and were in close contact with both Seminole and Miccosukee Indians, as well as black descendants of runaway slaves who resided among them. This initial period was one of relative peace. Micanopy means "head chief," a title awarded to the leader of the Alachua Seminoles. For a time, this frontier hamlet was also known informally as "Wantons."

Erected 2010 by Florida Heritage Landmark Sponsored by the Micanopy Historical Society and the Department of State. (Marker Number F-706.)