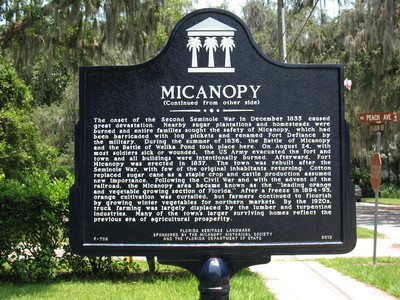 This is located in front of the Gazebo in Micanopy, Florida.

Continued from other side)

" On the onset of the Second Seminole War in December 1835 caused great devastation. Nearby sugar plantations and homesteads were burned and entire families sought the safety of Micanopy, which had been barricaded with log pickets and renamed Fort Defiance by the military. During the summer of 1836, the Battle of Micanopy and the Battle of Wilika Pond took place here. On August 24, with most soldiers sick or wounded, the US Army evacuated the fort and town and all buildings were intentionally burned. Afterward, Fort Micanopy was erected in 1837. The town was rebuilt after the Seminole War, with few of the original inhabitants returning. Cotton replaced sugar cane as a staple crop and cattle production assumed new importance. Following the Civil War and with the advent of the railroad, the Micanopy area became known as the "leading orange and vegetable growing section of Florida." After a freeze in 1894-95, orange cultivation was curtailed, but farmers continued to flourish by growing winter vegetables for northern markets. By the 1920s, truck farming was largely displaced by the lumber and turpentine industries. Many of the town's larger surviving homes reflect the previous era of agricultural prosperity."

Erected 2010 by Florida Heritage Landmark Sponsored by the Micanopy Historical Society and the Department of State. (Marker Number F-706.)