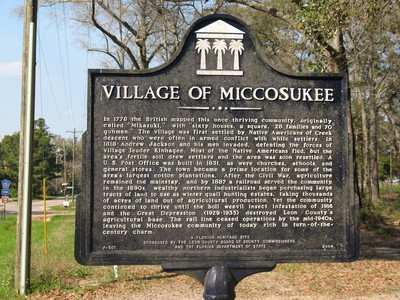 This is located on State Highway 59, in Miccosukee, Florida.

" In 1778 the British mapped this once thriving community. The village was first settled by Native Americans of Creek descent who were often in armed conflict with white settlers. In 1818 Andrew Jackson and his men invaded, defeating the forces of village leader Kinhagee. Most of the Native Americans fled, but the areas fertile soil drew settlers and the area was soon resettled. A U.S. Post Office was built in 1831, as were churches, schools, and general stores. The town became a prime location for some of the areas largest cotton plantations. After the Civil War, agriculture remained the mainstay, and by 1887 a railroad served the community. In the 1890s, wealthy northern industrialists began purchasing large tracts of land to use as winter quail hunting estates, taking thousands of acres of land out of agricultural production. Yet the community continued to thrive until the boll weevil insect infestation of 1916 and the Great Depression (1929-1935) destroyed Leon County's agricultural base. The rail line ceased operations by the mid-1940s, leaving the Miccosukee community of today rich in turn-of-the-century charm. "