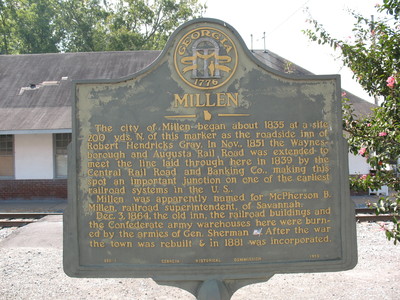 This is located outside the Railroad Depot in Milen, in Jenkins County, Georgia.

" The city of Millen began about 1835 at a site 200 yds. N. of this marker as the road side inn of Robert Hendricks Gray. In Nov., 1851 the Wayne borough and Augusta Rail Road was extended to meet the line laid though here in 1839 by the Central Rail Road and Banking Co., making this spot an important junction on one of the earliest railroad systems in the U.S. Millen was apparently named for McPherson B. Millen, railroad superintendent, Savannah. Dec. 3, 1864, the old inn, the railroad buildings and the Confederate army warehouse here burned by the armies of Gen. Sherman [USA]. After the war the town was rebuilt & in 1881 was incorporated."