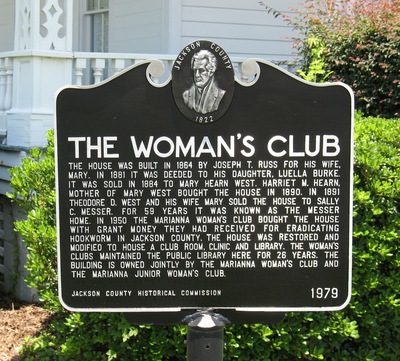 " The house was built in 1864 by Joseph T. Russ for his wife Mary. In 1881 it was deeded to his daughter, Luella Burke. It was sold in 1884 to Mary Hearn West. Harriet M. Hearn, mother of Mary West bought the house in 1890. In 1891 Theodore D. West and his wife Mary sold the house to Sally C. Messer. For 59 years it was known as the Messer home. In 1950 the Marianna Woman's Club bought the house with grant money they had received for eradicating hookworm in Jackson County. The house was restored and modified to house a club room, clinic and library. The woman's clubs maintained the public library here for 26 years. The building is owned jointly by the Marianna Woman's Club and the Marianna Junior Woman's Club. "