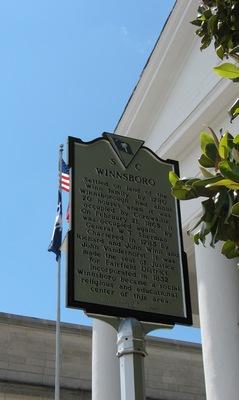 This is located on Congress Street, in front of courthouse, Winnsboro.

" Settled on land of the Winn family, by 1780 Winnsborough had about twenty houses when it was occupied by Cornwallis. On February 21, 1865, it was occupied again, this time by General W.T. Sherman. Chartered in 1785 by Richard and John Winn and John Vanderhorst, it was made the seat of justice for Fairfield District. Incorporated in 1832, Winnsboro became a social, religious, and educational center of this area."