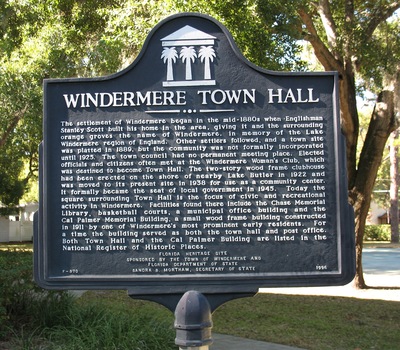 " The settlement of Windermere began in the mid-1880s when Englishman Stanley Scott built his home in the area, giving it and the surrounding orange groves the name of Windermere, in memory of the Lake Windermere region of England. Other settlers followed, and a town site was platted in 1889, but the community was not formally incorporated until 1925. The town council had no permanent meeting place. Elected officials and citizens often met at the Windermere Woman’s Club, which was destined to become Town Hall. The two-story wood frame clubhouse had been erected on the shore of nearby Lake Butler in 1922 and was moved to its present site in 1938 for use as a community center. It formally became the seat of local government in 1945. Today the square surrounding the town hall is the focus of civic and recreational activity in Windermere. Facilities found there include the Chase Memorial Library, basketball courts, a municipal office building and the Cal Palmer Memorial Building, a small wood frame building constructed in 1911 by one of Windermere’s most prominent early residents. Both the Town Hall and the Cal Palmer Building are listed in the National Register of Historic Places. "

Erected 1996 by Town of Windermere and Florida Department of State