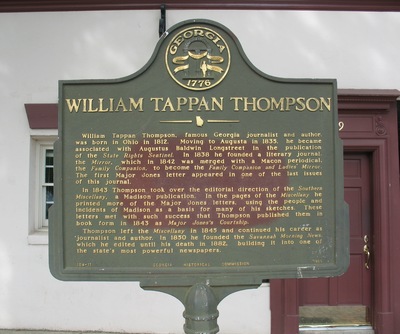 William Tappan Thompson, famous Georgia journalist and author, was born in Ohio in 1812. Moving to Augusta in 1835, he became associated with Augustus Baldwin Longstreet in the publication of the State Rights Sentinel. In 1838 he founded a literary journal, the Mirror, which in 1842 was merged with a Macon periodical, the Family Companion, to become the Family Companion and Ladies´ Mirror. The first Major Jones letter appeared in one of the last issues of this journal.

In 1843 Thompson took over the editorial direction of the Southern Miscellany, a Madison publication. In the pages of the Miscellany he printed more of the Major Jones letters, using the people and incidents of Madison as a basis for many of his sketches. These letters met with such success that Thompson published them in book form in 1843 as Major Jones´s Courtship.

Thompson left the Miscellany in 1845 and continued his career as journalist and author. In 1850 he founded the Savannah Morning News, which he edited until his death in 1882, building it into one of the state´s most powerful newspapers."