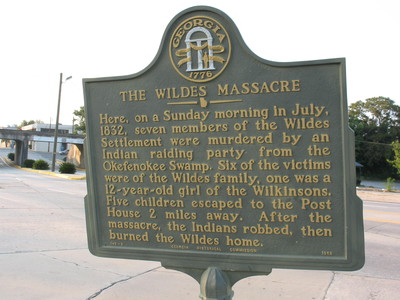 " Here, on a Sunday morning in July, 1832, seven members of the Wildes Settlement were murdered by an Indian raiding party from the Okefenokee Swamp. Six of the victims were of the Wildes family, one was a 12-year-old girl of the Wilkinsons. Five children escaped to the Post House 2 miles away. After the massacre, the Indians robbed, then burned the Wilds home."