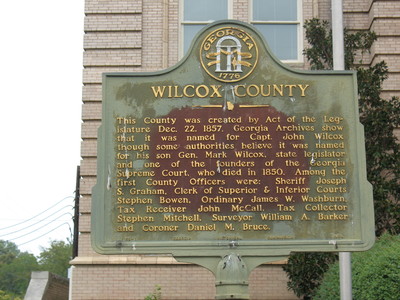 This marker is located in front of the Courthouse in Abbeville, in Wilcox Co, GA.

" This County was created by Act of the Legislature Dec. 22, 1857. Georgia Archives show that it was named for Capt. John Wilcox though some authorities believe it was named for his son Gen. Mark Wilcox, state legislator and one of the founders of the Georgia Supreme Court, who died in 1850. Among the first County Officers were: Sheriff Joseph S. Graham, Clerk of Superior & Inferior Courts Stephen Bowen, Ordinary James W. Washburn, Tax Receiver John McCall, Tax Collector Stephen Mitchell, Surveyor William A. Barker and Coroner Daniel M. Bruce. "