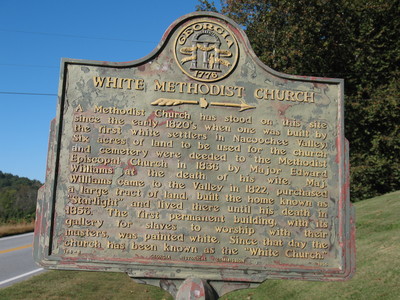 This marker is located on the GA 17 in front of Nacoochee United Methodist Church.

" A Methodist Church has stood on this site since the early 1820`s when one was built by the first white settlers in Nacoochee Valley. Six acres of land to be used for the church and cemetery were deeded to the Methodist Episcopal Church in 1836 by Major Edward Williams at the death of his wife. Maj. Williams came to the Valley in 1822, purchased a large tract of land, built the home known as `Starlight` and lived there until his death in 1856. The first permanent building, with its gallery for slaves to worship with their masters, was painted white. Since that day the church has been known as the `White Church.`