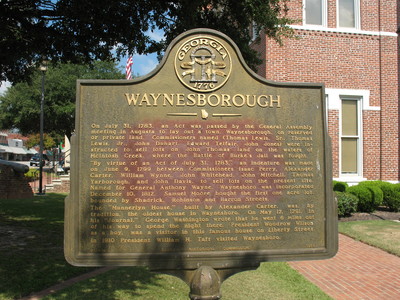 This marker is located outside the courthouse in Waynesboro , GA.

" On July 31, 1783, an Act was passed by the General Assembly meeting in Augusta to lay out a town, Waynesborough, on reserved or private land. Commissioners named (Thomas Lewis, Sr., Thomas Lewis, Jr., John Duhart, Edward Telfair, John Jones) were instructed to sell lots on John Thomas´ land on the waters of McIntosh Creek, where the Battle of Burke´s Jail was fought.

´By virtue of an Act of July 31, 1783,´ an indenture was made on June 9, 1799 between Commissioners Isaac Perry, Alexander Carter, William Wynne, John Whitehead, John Mitchell, Thomas Yarborough, and John Davis, to sell lots on the present site. Named for General Anthony Wayne, Waynesboro was incorporated December 10, 1812. Samuel Moore bought the first one acre lot bounded by Shadrick, Robinson and Barron Streets.

The ´Munnerlyn House,´ built by Alexander Carter, was, by tradition, the oldest house in Waynesboro. On May 17, 1791, in his ´Journal,´ George Washington wrote that he went 6 miles out of his way to spend the night there. President Woodrow Wilson, as a boy, was a visitor in this famous house on Liberty Street. In 1910 President William H. Taft visited Waynesboro."