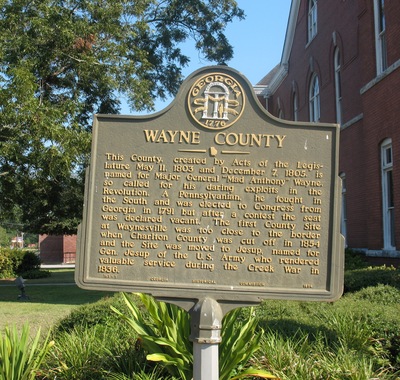 This marker is located in front of the courthouse in Jesup, GA.

The text reads as : " This County, created by Acts of the Legislature May 11, 1803 and Dec. 7, 1805, is named for Major General `Mad Anthony` Wayne, so called for his daring exploits in the Revolution. A Pennsylvanian, he fought in the South and was elected to Congress from Georgia in 1791 but after a contest the seat was declared vacant. The first County Site at Waynesville was too close to the border when Charlton County was cut off in 1854 and the Site was moved to Jesup, named for Gen. Jesup of the U.S. Army who rendered valuable service during the Creek War in 1836. "