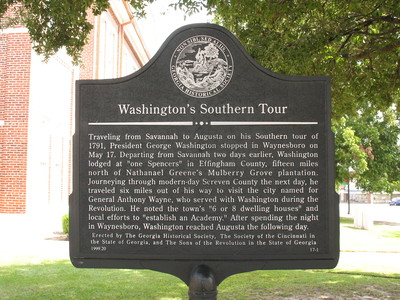 This marker is located outside the Burke County Courthouse, Waynesboro, Ga.

" Washington’s Southern Tour Traveling from Savannah to Augusta on his Southern tour of 1791, President George Washington stopped in Waynesboro on May 17. Departing from Savannah two days earlier, Washington lodged at “one Spencers” in Effingham County, fifteen miles north of Nathanael Greene’s Mulberry Grove plantation. Journeying through modern-day Screven County the next day, he traveled six miles out of his way to visit the city named for General Anthony Wayne, who served with Washington during the Revolution. He noted the town’s “6 or 8 dwelling houses” and local efforts to “establish an Academy.” After spending the night in Waynesboro, Washington reached Augusta the following day."