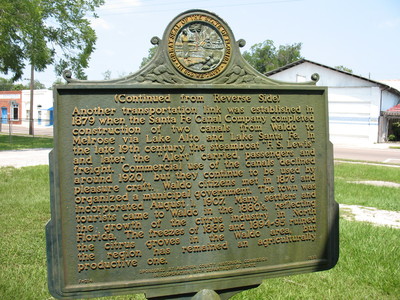 The text reads as : Continued from (side 1)

"Another transportation link was established in 1879 when the Santa Fe Canal Company completed construction of two canals from Waldo to Melrose via Lake Alto and Lake Santa Fe. In the late 19th century the steamboat "F.S. Lewis" and later the "Alert" carried passengers and freight. Commercial use of the canals declined around 1920, but they continue to be used by pleasure craft. Waldo citizens met in 1876 and organized a municipal government. The town was incorporated August 1, 1907. Many settlers and tourists came to Waldo in the 1880´s, reflecting the growth of the citrus industry in North Florida. The freezes of 1886 and 1894-95 ruined the citrus groves in the Waldo area, but the region has remained an agriculturally productive one."