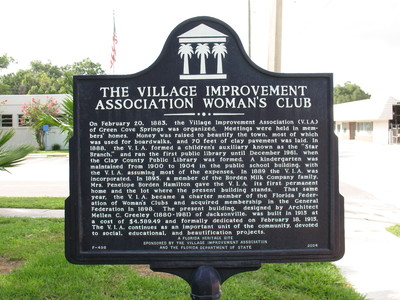 The text on the marker reads as : " On February 20, 1883, the Village Improvement Association (V.I.A.) of Green Cove Springs was organized. Meetings were held in members homes. Money was raised to beautify the town, most of which was used for boardwalks, and 70 feet of clay pavement was laid. In 1888, the V.I.A. formed a children's auxiliary known as the Star Branch, and ran the first public library until December 1961, when the Clay County Public Library was formed. A kindergarten was maintained from 1900 to 1904 in the public school building, with the V.I.A. assuming most of the expenses. In 1889 the V.I.A. was incorporated. In 1895, a member of the Borden Milk Company family, Mrs. Penelope Borden Hamilton gave the V.I.A. its first permanent home and the lot where the present building stands. That same year, the V.I.A. became a charter member of the Florida Federation of Woman's Clubs and acquired membership in the General Federation in 1898. The present building, designed by Architect Mellen C. Greeley (1880-1981) of Jacksonville, was built in 1915 at a cost of $4,589.49 and formally dedicated on February 18, 1915. The V.I.A. continues as an important unit of the community, devoted to social, educational, and beautification projects. "

Sponsors: the Village Improvement Association and the Florida Department of State - 2004