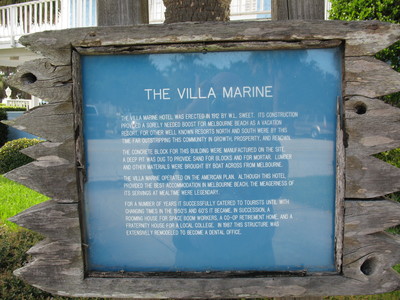 " The Villa Marine Hotel was erected in 1912 by W.L. Sweet. Its construction provided a sorely needed boost for Melbourne Beach as a vacation resort, for other well known resorts north and south were by this time outstripping this community in growth, prosperity, and renown.

The concrete block for this building were manufactured on the site. A deep pit was dug to provide sand for blocks and for mortar. Lumber and other materials were brought by boat across from Melbourne.

The Villa Marine operated on the American plan. Although this hotel provided the best accommodation in Melbourne Beach, the meagerness of its servings at mealtime were legendary.

For a number of years it successfully catered to tourists until with changing times in the 1950's and 60's it became, in succession, a rooming house for space boom workers, a co-op retirement home, and a fraternity house for a local college. In 1987 this structure was extensively remodeled to become a dental office."