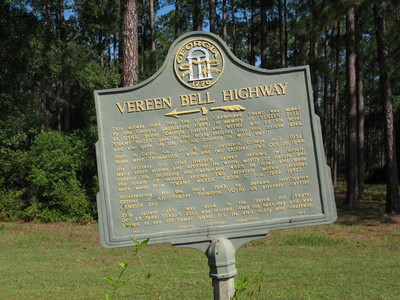 Text on the marker reads as :

" This access road into the great Okefenokee Swamp was named by the Georgia Legislature (1946) in memory of VEREEN BELL, Lt. USNR, young Georgia patriot and writer, who by his novel `SWAMP WATER` gave to the world insights into this unique area, and who gave his life for his country in World War II.

His brilliant but brief literary career included two novels, many short stories and articles. He wrote mostly of nature and outdoor life, including the Okefenokee, which he loved and made the locale of several stories. Two separate motion pictures were made from `SWAMP WATER,` (20th C. Fox, 1942, 1952).

This valiant ship was sunk in the Battle for Leyte, Oct. 23, 1944. VEREEN BELL was injured, died the next day and was buried at sea of Samar Island, P.I. He dies nobly and unafraid."