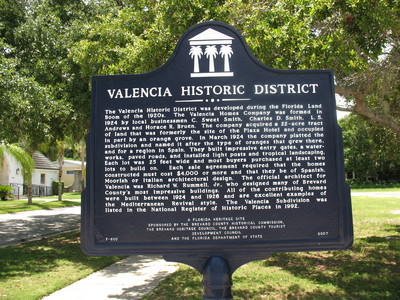 This marker is located on Valencia Road, Osceola Dr. and Orange Avenue in Brevard County.

" The Valencia Historic district was developed during the Florida land boom of the 1920s. the Valencia homes company was formed in 1924 by local businessmen c. sweet smith, Charles d. smith, l.s. Andrews and Horace r. bruen. the company acquired a 22-acre tract of land that was formerly the site of the plaza hotel and occupied in part by an orange grove. in march 1924 the company platted the subdivision and named it after the type of oranges that grew there, and for a region in Spain. they built impressive entry gates, a waterworks, paved roads, and installed light posts and tropical landscaping. each lot was 25 feet wide and most buyers purchased at least two lots to build on. each sale agreement required that the homes constructed must cost $4,000 or more and that they be of Spanish, Moorish or Italian architectural design. the official architect for Valencia was Richard w. rummell, yr., who designed many of Brevard county´s most impressive buildings. all of the contributing homes were built between 1924 and 1926 and are excellent examples of the Mediterranean revival style. the Valencia subdivision was listed in the national register of historic places in 1992."