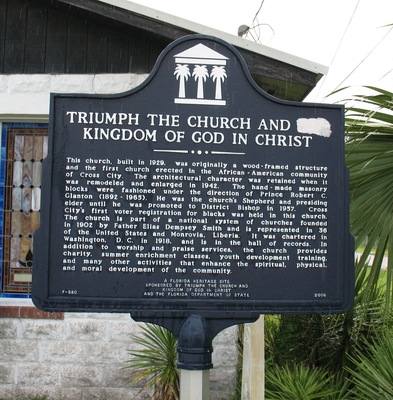 Triumph the Church and the Kingdom of God in Christ is in Dixie County In Florida.

" This church, built in 1929, was originally a wood-framed structure and the first church erected in the African-American community of Cross City. The architectural character was retained when it was remodeled and enlarged in 1942. The hand-made masonry blocks were fashioned under the direction of Prince Robert C. Glanton (1892-1965). He was the church’s Shepherd and presiding elder until he was promoted to District Bishop in 1957. Cross City’s first voter registration for blacks was held in this church. The church is part of a national system of churches founded in 1902 by Father Elias Dempsey Smith and is represented in 36 of the United States and Monrovia, Liberia. It was chartered in Washington, D.C. in 1918, and is in the hall of records. In addition to worship and praise services, the church provides charity, summer enrichment classes, youth development training, and many other activities that enhance the spiritual, physical, and moral development of the community. "

Sponsors: TRIUMPH THE CHURCH AND THE KINGDOM OF GOD IN CHRIST AND THE FLORIDA DEPARTMENT OF STATE