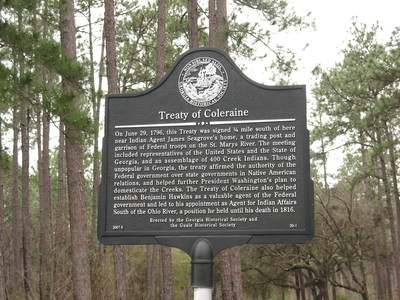 This marker is Located on south side of Ga 40 opposite County Road 52 (at private road), just east of Charlton County line.

" On June 29, 1796, this Treaty was signed ¼ mile south of here near Indian Agent James Seagrove´s home, a trading post and garrison of Federal troops on the St. Marys River. The meeting included representatives of the United States and the State of Georgia, and an assemblage of 400 Creek Indians. Though unpopular in Georgia, the treaty affirmed the authority of the Federal government over state governments in Native American relations, and helped further President Washington´s plan to domesticate the Creeks. The Treaty of Coleraine also helped establish Benjamin Hawkins as a valuable agent of the Federal government and led to his appointment as Agent for Indian Affairs South of the Ohio River, a position he held until his death in 1816. "