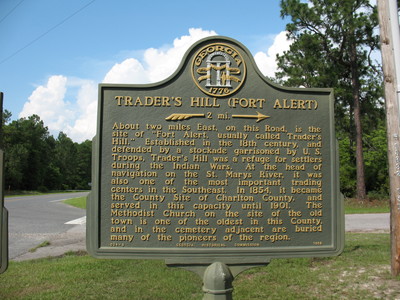 The Trader's Hill (Fort Alert) historical marker is located on the east side of Georgia Highway 121 just south of Folkston, Georgia.

" About two miles East on this Road, is the site of "Fort Alert, usually called Trader's Hill." Established in the 18th century, and defended by a stockade garrisoned by U.S. Troops, Trader's Hill was a refuge for settlers during the Indian Wars. At the head of navigation on the St. Marys River, it was also one of the most important trading centers in the Southeast. In 1854, it became the County Site of Charlton County, and served in this capacity until 1901. The Methodist Church on the site of the old town is one of the oldest in this Country, and in the cemetery adjacent are buried many of the pioneers of the region."