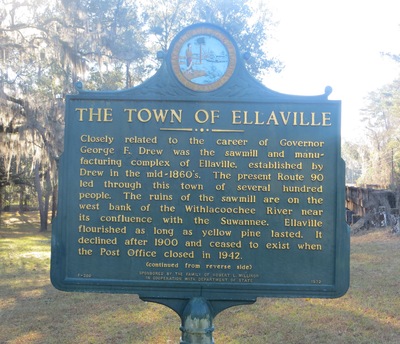 This marker is close to Ellaville, Florida in Madison County.

" The Town of Ellaville Closely related to the career of Governor George F. Drew was the sawmill and manufacturing complex of Ellaville, established by Drew in the mid-1860's. The present Route 90 led through this town of several hundred people. The ruins of the sawmill are on the west bank of the Withlcoochee River near its confluence with the Suwannee. Ellaville flourished as long as the yellow pine lasted. It declined after 1900 and ceased to exist when the Post Office closed in 1942."

Erected 1972 by the Family of Robert L. Millinor in cooperation with Department of State. (Marker Number F-200.)